On April 28, we had our first (yes, our first!) in-person meeting of the group. It was a very special moment. The meeting started with a brief presentation by Drs. Silvia Donker on the upcoming activities of The Patio, with an emphasis on the symposium we are organizing in July.

We then attended Dr. Silvia Majó-Vázquez’s —research fellow at the Reuters Institute for the Study of Journalism, University of Oxford— presentation on the study of the fragmentation of the online information ecosystem. Silvia presented an innovative methodological approach, the Backbone Structure of Audience Networks, to study online news consumption. She then demonstrated the usefulness of that approach to assessing, from a cross-country and a cross-platform perspective, the fragmentation of the information ecosystem. Silvia’s research paved the way for an interesting discussion with the participants on several aspects of her (and colleagues) methodological approach and on the social implications of the results of their investigations. The slides of Silvia’s presentation can be found here.

We concluded the meeting with a toast to celebrate the first year of The Patio!

The participants greatly enjoyed Başak’s workshop, and we are already working on the organization of a second edition. Stay tuned!

The third meeting of The Patio took place on May 27, 2021. The meeting started with Drs. Silvia Donker sharing with the participants some thoughts about the workshop ‘Introduction to Social Network Analysis’ organized by The Patio and the Digital Humanities Centre (see the post below).

Ahmad’s presentation can be found here.

Second Edition of the workshop “Introduction to Social Network Analysis”

On May 27, 2021, The Patio and the Centre of Digital Humanities organized the workshop “Introduction to social network analysis”. Twenty seven participants, from a wide variety of disciplinary backgrounds (e.g History, Journalism, Business & Management and Sociology) and research interests attended the workshop.

The workshop was divided into two parts, a theoretical introduction to social networks and a hands-on tutorial on social network analysis and visualizations. Dr. Marc Esteve Del Valle led the theoretical part. He went from introducing fundamental social network concepts to presenting the key elements of the design of a network research project. In doing so, Marc built on several examples of previous research in the field, from the study of networks in organizations to the analysis of animal social networks.

The hands-on tutorial part was led by Drs. Silvia Donker. The tutorial started with a quick demonstration on how to use the social network visualisation software Gephi. After this demonstration, the participants were asked to create a network graph of a music artist of their choice and run several basic network centrality metrics to their networks. We saw some great network visualisations in the group. 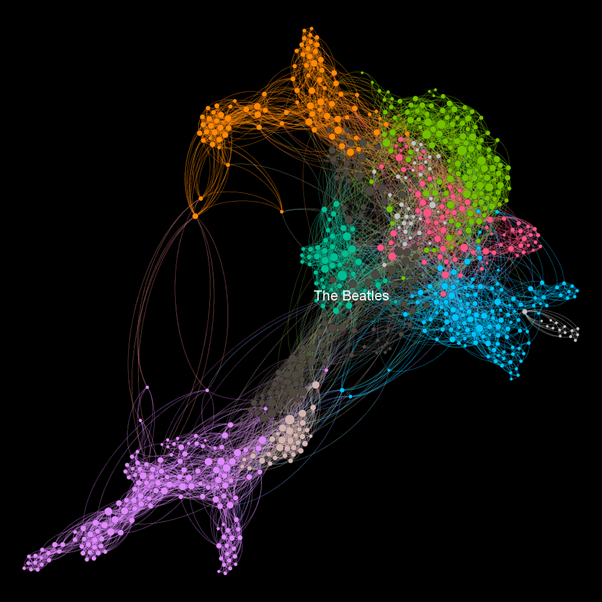 Related artist network of The Beatles, based on Spotify’s ‘Fans Also Like’ section, highlighting the clusters.*

All in all, the participants enjoyed the session a lot, as shown by their evaluations of the workshop. Indeed, all of them stated that they will recommend following the workshop to other colleagues.

What did the participants say about the workshop?

“I found the combination of theory and practice (hands-on), plus additional discussion useful. It was well prepared and the crystal clear hand-out helped a lot.”

“The workshop was really great!!”

“I very much appreciate the hands-on approach of Silvia’s part of the workshop. It was a great way to participate.”

The second meeting of The Patio took place on January 14, 2021. The meeting started with Dr. Marc Esteve Del Valle sharing the activities The Patio plans for this 2021:

Marc continued making three announcements on social networks research opportunities  involving some of the group members: a CfP of the section on Political Networks at the ECPR General Conference, a CfP at the Historical Networks Conference, and a CfP  from the Center of Information and Technology (CIT) on projects dealing with Virtual Reality and 3D technology.

In what followed, 16 colleagues from several Faculties (Arts, Philosophy, Social Sciences, and Science and Engineering) took the floor -or to put it more accurately, the screen- and briefly introduced themselves and their research on social networks. These presentations gave everyone a better idea of who’s involved in this research group and revealed some potential research synergies between the members of The Patio.

Finally, Dr. Sean White presented his research on support paths between Brazilian entrepreneurs (see the slides of the presentation here). Sean’s theoretically sound and methodologically innovative research raised an interesting discussion among the participants about the conceptualization of homophily in social networks and the use of agent-based models to model individuals’ social behaviour.

We were very happy to see how the second meeting of The Patio fostered the emergence of a useful interdisciplinarity community of researchers on social networks and we are looking forward to the next meetings.

On October 15 2020, the launching event of The Patio took place. In the event, we welcomed our Foundational Members and about 20 other attendees. Dr. Susan Aasman opened the gathering with some introductory remarks on how the initiative came into being, and with the ceremonial cutting of a ribbon declared The Patio officially launched.

Then Dr. Marc Esteve Del Valle introduced The Patio: its goals, organization, members and strategy. He argued that The Patio aims to bring together researchers from various disciplinary backgrounds having an interest in social networks. To do so, The Patio facilitates a collegial environment where ideas about network projects are shared. In Marc’s words, “The Patio” is like a university’s courtyard, a meeting point, a space for reflection among colleagues.

Next, Drs. Silvia Donker presented her research project on social networks of early modern natural philosophers. The aim of the overall project is to determine and explain how the process of normalisation embedded in teaching practices shaped the evolution of early modern natural philosophy. Her research poses particular challenges with regard to gappy data and limited information of historical actors. She is filling this void through the use of indirect ties, e.g. relations based on a shared environment. This social dimension will at a later stage of the project be combined with a semantic one. Silvia’s talk sparked a nice discussion among the attendees, with some great feedback and source-sharing.

We were glad to see how the first meeting of The Patio triggered an interesting debate among many social network scholars and we expect its coming meetings to foster the creation of a truly interdisciplinary space of reflection on social networks.